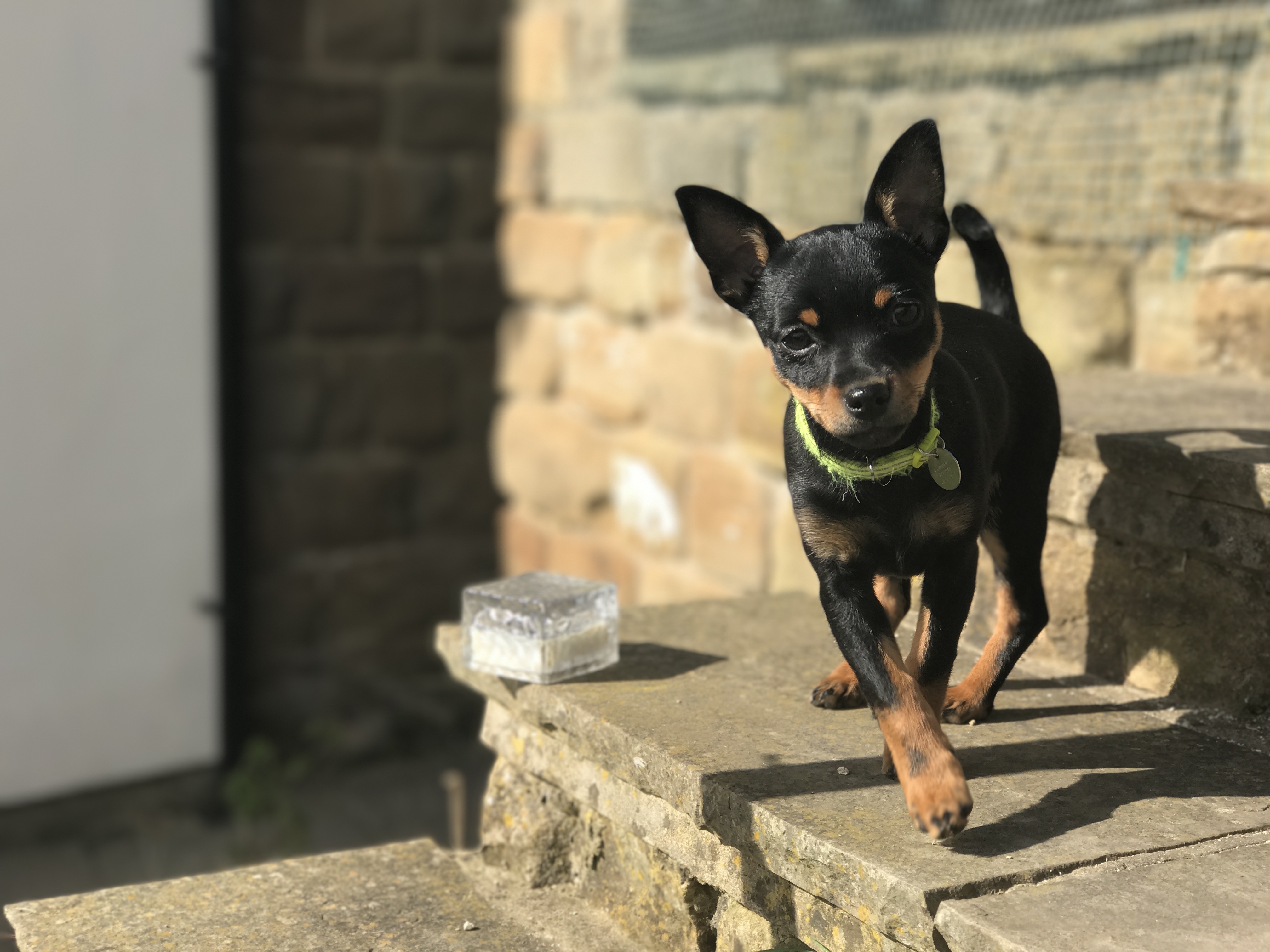 Otter has now been with us a fortnight and it feels like forever. She is settled in with the other dogs and is playing happily with Roo, who, although still a puppy himself, is twenty times her size!

She is a pleasure to have around - lots of fun, affectionate and bright as a button - but it is also hard on the nerves! She is so tiny and vulnerable. So I have spent a lot of time over the past two weeks watching her. Closely supervising play with Roo. Playing endless swapsies for the inappropriate tiny things she has managed to find and put in her mouth. Practising lots of recall away from fence lines that she could slip through.

But I have realised that feeling safe is also important to her. She will use those gaps when playing with Roo, skipping in and out of areas where he can’t follow, if he gets too excited. She will invite play on a soft surface where he can roll her around without her getting hurt. She will ask to be picked up if it is getting too much for her.

As long as the environment allows it, I can trust her to keep herself safe.

Feeling safe is a fundamental need for all of us. Without it we can’t eat, sleep, relax or learn. But what is often forgotten about feeling safe is that it is bound up with choice. It is knowing we have options and are able to make choices about what we do that makes us feel safe. Take away that choice - even with the best intentions - and you remove a layer of feeling safe.

I could keep Otter safe by keeping her in her play pen all the time. I could closely control all the things she has access to and prevent any contact between her and Roo. But while she would be safe, she may still not feel safe and she would certainly not learn how to handle situations and build resilience. And she would be miserable!

So instead I give her options but I scaffold the environment to keep her as safe as possible, while allowing her to choose what she needs to do. It is not risk-free but it is managed risk. So they play in smaller areas, which have spaces that she can get into where he can’t follow, and which don’t allow his levels of excitement to escalate. And she can then choose how much and in what way she plays with him.

Remember the spiders? It was so important that I could choose to avoid or watch or move closer - in my own time. But I could only do that because other people scaffolded the interactions: barriers to begin with, spiders in a specific place, freedom to move around, support when I needed it.

Our reactive dogs need safety as well but they also need that choice. If we micro-manage their every move, they will be safe but they may still not feel safe. Instead we can scaffold the environment so they can manage their own safety: they can leave when they want, keep the distance they need, watch when they are ready. And then, having set up the environment to keep them as safe as possible, we can take a deep breath and trust them to make choices that will keep them feeling safe.

So how do we scaffold? It depends on your dog and your context but it starts with space - enough to feel comfortable. Then it might include using barriers to prevent unexpected intrusion, offering a safe space to retreat to, encouraging your dog to self calm through movement and sniffing, allowing time to process things that they are concerned about, letting them choose when they want to move closer. Look at the context you are in and ask yourself: what can I change to make my dog feel safer?

One final thing. If Otter feels concerned she asks to be picked up - and I do it. Asking for help is a choice too and one we need to listen to. Scaffolding safety also means being prepared to intervene when they need us to so they know we are backing them up.